This article is for those who would like to set goals, but can’t seem to be able to. In your mind you usually say “I’ll get around to it, someday,” and usually never do.

Writing Goals Down Helps You Achieve Them

There have been plenty of studies conducted and many self-help books written on the topic why it is important to set goals. According to those books and studies, people who set goals, and especially write them down, have a higher rate of achieving them. Nonetheless, most people tend to avoid setting goals and find this activity boring, unnecessary, and uncomfortable. This article may explain some of the reasons why and give you some tools on how to change that.

However, most people still don’t want to write down their goals and put a deadline on them. I have to admit this is true for me, too, to a degree, but I will talk about this in my next article “Happy Living Without Goals.” People prefer to set generic goals (“I want a better life”, “I want a better job”, etc), keep them in mind and have no certain deadlines by which those goals will have to be accomplished.

Have you noticed that when it comes down to setting goals like during the time for the New Year’s Resolutions, you think of them, but do not want to actually put them on paper. Because putting them on paper means really committing to them. Writing them down is like putting a signature on some contract, and it has a strong psychological effect on you, an inner psychological pressure. This pressure does work for a while, but usually after some short time, the steam runs out and you are back to your old patterns, where your goals are once again set aside for some unknown future. This becomes a pattern: set a goal, pursue it, get tired or distracted from it, quit it.

Writing Down a Goal is Its First Step in Physical Manifestation

Nonetheless, it is good to set goals.  In fact, writing down a goal is its first level of physical manifestation – before that, it was just an immaterial thought in the quantum field of possibilities. However, when you set a goal, and especially write it down, you invest and allocate some part of your psychic energy, some part of you into it. You are a sort of splitting off some part of your consciousness to fulfill that goal. In fact, there is a very powerful goal manifestation exercise in Transcendence System, where you write your goal 111 times in order to speed up its completion.

So, if you mostly have memories of being able to achieve your goals, and do not have many limiting beliefs, this act of writing goals down will indeed help you.

But then, you wouldn’t be reading this article, would you?

Nobody’s perfect. There are areas in which you easily achieve goals, and there are areas in which you are lagging behind. Setting a goal in your weak areas would actually activate your memories of failure and unpleasant emotions connected with them. All those split-off parts of you that did not get the satisfaction of achieving their goals before, get activated now, causing unconscious negative feelings. These feelings also bring forth the limiting beliefs that are formed with every uncompleted task (“I’m not got at this or that”). You can read about How Limiting Beliefs Get Formed in this post.

Unfinished Goals are to Blame

When you don’t achieve your goals, you tend to beat yourself up for them and start feeling discontent with yourself. Usually this discontent is in the background of your thoughts. If there’s a lot of this discontent already accumulated, you may even develop a case chronic procrastination and even depression, but that’s a topic for another article (“How to Stop Procrastination with Spiritual Technologies?”)

Setting new goals reminds you of the unpleasant feelings of not being able to achieve it. There’s a certain subconscious nagging. “If you set a goal, you may not meet it, and that would suck! – AGAIN!!” So it’s better not to set one. But if you have a lot of these reminders, you’re actually activating a whole network of unfinished business, a lot of it is unconscious.

Release Yourself From the Burden of Unfinished Goals

Russians call unfinished business “a tail”. So when you have lots of unfinished matters, Russians say “you’ve got lots of tails.” And all these “tails” hold you back, preventing you from moving forward or at all. These tails cause your unconscious self-sabotage and take up your energy, being invested in those split-off parts that still try to accomplish their goals. They hold you back emotionally and psychically.  So, you need to cut them off, or better, release them.  Don’t be afraid that if you release your goal, you will never achieve it. Once you release your unfinished goals, you will get a lot of energy and focus back. You will realize which goals are not relevant for you anymore and waste no more energy pursuing them. As for those goals that you still want to pursue, you will be excited to set them again, but you first want to release the old ones – I know it’s not logical, but it works.

If you still have a piece of paper with your last year’s new year’s resolutions, pull it out now. Otherwise, to the best of your knowledge, make a list of all of the things you wanted to achieve either for the last year or all of them, but haven’t yet.

The first two methods are for people who haven’t downloaded my free manuals for Basic PEAT or The Spinner and are not familiar with any of the other Spiritual Technologies I teach.

Let go: Look at an unfinished goal on your list. Close your eyes.

Think about the goal, get in touch with those feelings of desire to have that goal accomplished. Feel them fully in your body.  Imagine now that you put your unfinished goal and those feelings into a helium balloon, which you hold in your hand. And then, with your sincerest intent, release the balloon with the goal and desire for its accomplishment up into the sky, up into space and out into the Universe. Feel the relief of letting go.

Forgive: Now imagine a ball of light above your head that showers you with light from the top of your head all the way down to your feet, and forgive yourself for not completing this goal. Feel the relief of being forgiven.

Switch Focus: Now think of one goal that you did finish. And enjoy the feelings of accomplishment for a few seconds.

Tip: To speed things up, you can put several or all unfinished goals into one balloon. But doing them one by one is probably more effective.

The Power of Visualization

In the very famous film “the Secret” and in the books by Esther and Jerry Hicks such as “Ask and It is Given”, they talk a lot about visualization. Visualization is a wonderful tool for manifesting your goals (if you took care of the subconscious inner resistance), and it works by the principle “where attention goes, the energy flows.” When you think about something and visualize it, you start attracting it into your life.

Visualization also has another wonderful application. The thing is, the scientists discovered that the mind can not distinguish between what really happened or what you imagined. They did a study with athletes, where they created two groups. One group only imagined that they were practicing in their minds. And the other actually did train. To a big surprise, the performance of the first group was almost the same as of the second group of athletes who actually trained. Moreover, they found that the same brain neurons were firing up in the athletes who actually trained and those who imagined that they were training.

So, as far as the unfinished goals go, the mind would believe that you actually finished a goal, if you truly imagined and visualized it, with the full range of positive emotions.

So, if you still have that list of unfinished goals, pull it out and start visualizing! If you always wanted to write a book, create a start up, start traveling  (some of these are my goals), imagine you have already done it. It worked for me!

If you don’t already have my free manual “Basic PEAT Manual 2.0 – How To Make a Leap in Consciousness?”, then go to this link https://staastao.com/join  If you are reading this article following the link from the newsletter I sent you, you can download the manual from the link in the left sidebar in the newsletter.

Also, you can attend this or next Sunday’s Webinar on the advanced use of the Basic PEAT for spiritual and personal growth. https://staastao.com/cls

Another way of releasing your energy from the past unfinished goals is to use Spiritual Technologies such as Basic PEAT.  Remember, that the reason why Spiritual Technologies are so successful is because they address all challenges holistically, taking into account the duality of each experience. In order to create a positive experience, you first need to release any attachment to the negative. I talk about this in the article (“Why Positive Thinking Doesn’t Often Work?”)

Therefore, in regard to unfinished goals, if you are going to use Basic PEAT, first you want to release your discontent, guilt, shame, or whatever other negative emotion you feel about not completing your goal. If you have a specific event signifying your failure, then use it for better results, otherwise, just work on the general feeling of discontent. Then, you want to visualize an image of completion of your goal (make sure it is static), imagine that it is happening now, what are your positive emotions, body sensations, thoughts – get involved with your experience fully and do one or two cycles of Basic PEAT to expand that feeling in you.

However, you can still integrate the positive experience with the Spinner technique. Imagine a positive outcome of your goal and use it as the image.  For integration, as opposed to release, you need to spin in the CLOCKWISE direction.  And while spinning clockwise, you want to move your index finger that points to the image closer and closer towards your chest (similar to what you do when you point towards your chest, when you introduce yourself “I am [your name]”).

It is beneficial to write down goals, but not when it is in an area of your weakness, where there may be a lot of memories of the former unfinished goals. In which case, you will avoid setting goals. Feeling burdened or pressured by your goals can seriously undermine their achievement and squeeze you out of your creative energy. However, using aforementioned techniques, you can make setting goals beneficial again. 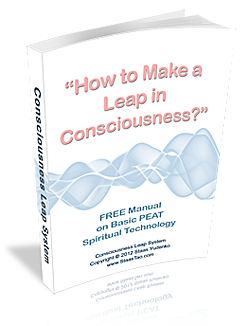